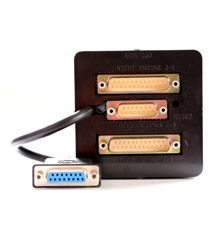 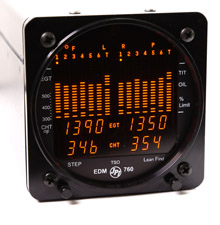 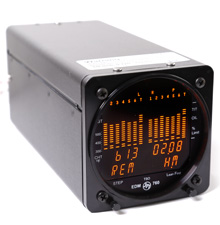 Fly your twin with the time tested reliability of our EDM760. Cost effective and compact, with plenty of options, customize to exactly what information you require. The Engine Data Management 760 system is the most advanced and accurate piston engine-monitoring instrument on the market. TSO’d for quality, the EDM 760 is not just another black box along for the ride. It is a Flight Engineer … a Maintenance Manager … a Backup Instrument. For the price there is nothing that gets close to it. You can almost think of the EDM 760 as your personal flight engineer. It’s always there, working in the background, constantly watching over your engine while you concentrate on flying the aircraft. You can make an entire flight without ever pushing a button, if you so choose. Yet your EDM will be monitoring your engine parameters three times a second and will warn you instantly if any parameter exceeds the programmed limit.

Precision Diagnostics:
Accuracy and Resolution, are two of the most misunderstood terms in instrumentation. Because an instrument displays 1 degree increments (resolution) does not mean it is accurate to 1 degree. JPI’s accuracy comes from its linearized thermocouples. Other’ put and estimating straight line through the center of the thermocouple calibration “S” curve. With this method the instrument is accurate at only three points along as the the straight line crosses the “S” curve. Therefore errors of +/- 10′ are quite possible while still displaying in 1degree resolution. Our competition is advertising +/- 1/2′ accuracy at full scale. This would mean that =/-1/2′ of 2000′ (full scale) is +/- 10′; there is a big difference. JPI has found nothing in the Aviation market that compares to our linearized accuracy.

Accuracy:
Using the latest microprocessor technology, the EDM will monitor up to twenty-four critical parameters in your engine, four times a second, with a linearized thermocouple accuracy of better than 0.1 percent or 2 F° which has been verified and tested by the FAA and thus TSO’d (Technical Standard Order). the EDM is constantly “red-line” checking all 29 critical parameters (not 16) that are automatically checked FOUR TIMES A SECOND, regardless of current display status.

Simplicity:
Two buttons address ALL the programming functions of the EDM. Leaning is accomplished quickly and automatically using the LeanFind™ procedure. With the EDM it is now possible to have substantially more diagnostic information available to you in a timely and usable manner.

automatically. JPI’s EDM-760 provides two methods of leaning: lean rich of peak (LEAN R) or lean of peak (LEAN L). With the advent of GAMI injector’s it is now possible to set the mixture lean of peak—saving fuel with a cooler running engine . The EDM 760 displays an inverted peak graph. Teledyne Continental has recommends 50oF lean of peak for the Malibu.

Upon reaching cruise configuration, you can use the LF, LeanFind™ mode to identify the first cylinder to reach peak EGT. After cruise power has been established, pre-lean the mixture to about 50° rich of peak. Tap the LF, LeanFind™ button and simply lean. As you begin to lean the mixture, the EDM will check all cylinders using a proprietary algorithm looking for the first cylinder to achieve peak EGT. Do not lean slowly as required by other instruments. Lean aggressively and continuously as you normally do. The EDM will indicate success in finding a peak by displaying the words LEANEST for two seconds, followed by a flashing the column and displaying the value of the EGT of the cylinder that peaked first. The word SET will also be displayed. (With the Fuel Flow Option the current fuel flow rate will be displayed on the right side of the digital display instead of the word SET.) The flashing cylinder will be locked—or set—into the digital display during the remainder of the LeanFind procedure to allow you to set the final mixture. The peak EGT value is remembered by the EDM and will be displayed as you hold the LF button. Notice that this cylinder is not necessarily the hottest EGT. JPI’s quick response, grounded, EGT probes permit the leaning process to take place quickly before there are major temperature changes. If you lean beyond peak, the EGT will drop and the engine will be operating lean of peak. The fuel flow option during LeanFind will simultaneously display fuel flow in Gal./Hr. and EGT. This will permit the pilot to enrichen the mixture while viewing the fuel that will be burned per hour. This is only possible with the JPI fuel flow with quick response fuel flow electronics.

After extensive observations of many fuel flow measurement products, JPI’s engineers concluded that all the systems presently on the market were not capable of supporting the EGT leaning process due to their slow response times. JPI has developed a fast response system that permits you to simultaneously view peak EGT and minimum fuel flow. As the pilot leans the engine he will see simultaneously fuel flow and peak EGT. Enrichen the engine 20 degrees and note the fuel flow. There will be an optimum EGT enrichment vs. fuel flow for your engine, giving maximum range and power. The EDM Memory will include fuel flow in the data file. A throttle change with GPS interface will display fuel required to next GPS waypoint or destination. The EDM can be set to monitor EGT or Fuel Flow only or both sequentially with the flip of a switch. The bar graph always displays EGT/CHT .

How much fuel has been used since you last refueled. This number will always become larger as fuel is consumed. You can instead show the fuel used on a long multi-fuel stop flight and we will see later in this video how to do that.

Based on the current fuel flow rate, displays the remaining endurance time. This parameter is most meaningful during cruise. During sea-level climb the fuel flow rate will be almost twice that of cruise and the endurance indication will be about half of actual. On the other hand, during a power reduction descent, the endurance will indicate more time than is actually available when flying at cruise power.

This parameter will be displayed only if your EDM 760 is receiving flight data from your GPS (this is a standard feature which is included with the Fuel Flow option). This will tell you how much fuel is required to get to the next waypoint or destination programmed on your GPS, based on your current fuel flow rate and present position.

Fuel reserve when you arrive at your next waypoint. This parameter will be displayed only if your EDM 760 is receiving flight data from your GPS (this is a standard feature which is included with the Fuel Flow option). This will tell you how much fuel reserve you can expect when you arrive at your next waypoint or destination programmed on your GPS, at the current fuel flow rate.

Distance per fuel units. Both the REQ and the RES indicator lights will be on at the same time. It will tell you your miles per fuel unit such as miles per gallon, miles per liter or miles per pound. It is based on your current ground speed and current fuel flow rate.

Please note: The EDM760 Twin is Discontinued but still supported.

The Engine Data Management 760 system is the most advanced and accurate piston engine-monitoring instrument on the market. TSO’d for quality, the EDM 760 is not just another black box along for the ride. It is a Flight Engineer … a Maintenance Manager … a Backup Instrument.